Europe’s annual technology show IFA has been stripped down due to the ongoing COVID-19 pandemic, but that isn’t stopping Qualcomm from making virtual announcements around the event. Unfortunately, you’ll have to wait a little while to see the new devices in action.

Arguably the biggest Qualcomm news at IFA is the company’s expansion of 5G from the midrange Snapdragon 6 series down to an even more affordable tier of phones. This translates to Snapdragon 4 series chips for devices priced from $125 to $250. That’s notably before any carrier subsidies, which means early next year 5G technology will become affordable for an estimated 3.5 billion users around the world, in many cases without contracts. Qualcomm expects phones at the higher end of that price range to sport fancier cameras and screens than the less expensive ones while remaining performant for apps and games.

Qualcomm is also revealing its next PC chipset, the Snapdragon 8cx Gen 2, which signals how smartphone DNA will shape upcoming laptops. The first-generation 8cx was announced in late 2018 and can now be found in Lenovo’s Flex 5G (aka Yoga 5G) laptop, where it enables Windows apps to run with full-day battery life and take advantage of Verizon’s nascent 5G network. 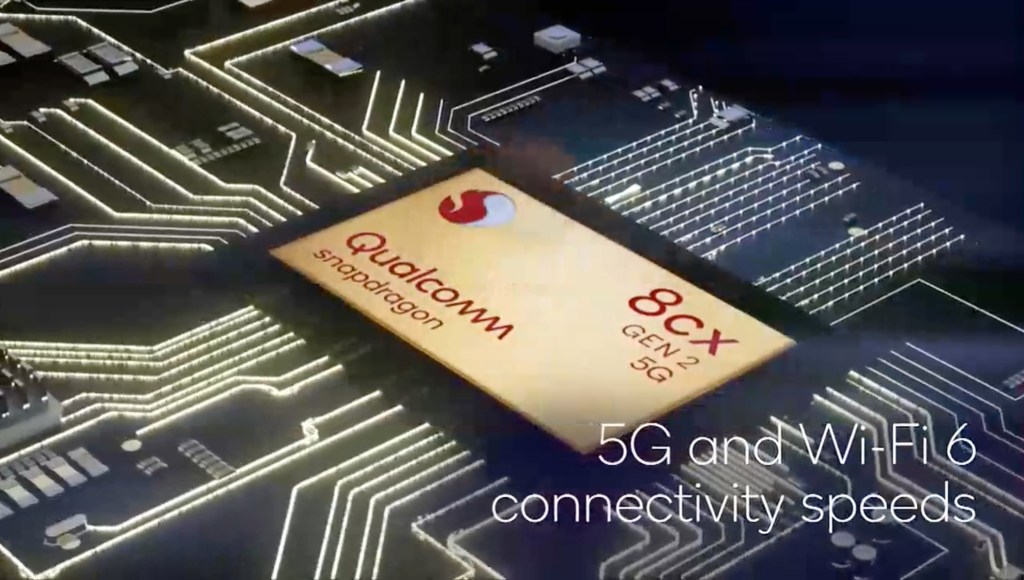 Unsurprisingly, the second-generation 8cx touts typical PC chip speed and performance advantages, promising up to 18% better “total system performance” and 39% better energy performance per watt compared with Intel’s latest 10th-generation Core i5 CPU running at 15 watts. And there will once again be a 5G version, though any changes to it are unclear. The most interesting advances are in camera and video performance, which will collectively up the ante for business video conferencing.

As video calling continues to surge, 8cx Gen 2 machines will support 32-megapixel cameras with up to 4K video resolution and HDR, plus the bandwidth for dual 4K60 displays, including a 4K internal laptop screen. Assuming the conferencing software and wireless network are up to the task, the combination of high-resolution camera and screen tech could make calls look gorgeous. On the sonic side, Qualcomm is also including virtual surround sound support, plus its Aqstic echo cancellation and noise suppression features, enabling calls to sound more vivid and cleaner than ever before.

One somewhat overlooked area is the 8cx Gen 2’s dedicated AI engine, which doesn’t appear to be receiving the sort of huge leaps forward that accompanied the original 8cx announcement. Promising 9 TOPS, the AI system will support persistent eye contact in video conferencing, cartoony avatars for video chats as a more private alternative to live video streaming, and 7 times faster threat detection for certain cybersecurity applications — but none of these features is likely to be exclusive to the Gen 2 chipset.

Last up: Qualcomm is also announcing Adaptive ANC, an active noise cancellation feature coming to its premium QCC514x chipset for truly wireless Bluetooth earphones — a category that has been surging in recent months. The new feature promises peak noise reduction of -25 decibels at certain frequencies, with -5 to -10 decibel reduction across much of the sonic spectrum, while automatically adapting to both the user’s current ear tip fit and environmental conditions. Wearers won’t need to worry about getting a perfectly tight seal, and the system will adjust to jogging and other activities.

No Adaptive ANC products are being announced today, but as Qualcomm research suggests 71% of consumers now want noise cancellation in their wireless earbuds, the technology should appear in multiple form factors soon enough.

Two companies are publicly announcing support for the Snapdragon 8cx Gen 2 today: Acer showed a Spin 7 convertible laptop slated to be available by year’s end, and HP is working on an unnamed business-focused PC. Motorola, Oppo, and Xiaomi are all planning to release 5G devices with Snapdragon 4 series chips in the first quarter of 2021, though specific chip and phone names aren’t being released today.