This is why they fight reporting requirements. No one knows you’re just making poor people poorer unless you’re required to report all of your forfeitures. Up in Minnesota — like far too many other places around the country — law enforcement officers roll Sheriff of Nottingham style. Unfortunately, there’s no Robin Hood lurking in the forests patrolled by opportunistic officers.

Here’s state auditor Julie Blaha offering her opinion about forfeitures in Minnesota after digging into the data the agencies provided:

“The data shows that when it comes to the impact of forfeitures, the big story is in the small numbers,” Blaha said in a statement. “Those kinds of amounts have a small impact on government systems, but they have a big impact at the individual level.”

“If you are managing a public safety budget, small forfeitures are a minor and unpredictable part of your revenue stream,” Blaha continued. “But if you are a low income person experiencing a forfeiture, those amounts can have a big effect on your life. Having a few hundred dollars seized can mean the difference between making rent or homelessness. Losing that old car can lead to missing work and losing your job.”

The program punishes the poor. Very few law enforcement agencies which rely on forfeiture for their discretionary funds want to tangle with an actually organized criminal organization. Those guys can afford lawyers. Most citizens can’t. That’s why most seizures are so small they’re not worth fighting in court. At the end of the jurisprudence day, citizens may win back their cash or cars, but they’ll lose the war, having paid more in court and legal fees than what their property is worth.

Everything adds up to real money if you have enough of it. Here’s the ugly truth, straight from the auditor’s report [PDF].

Only seven percent targeted amounts that might actually do damage to criminal organizations. 64% of forfeitures targeted less than $1,000.

Here’s the list of crimes associated with these seizures, which shows officers are willing to take easy wins and easy cash, rather than actually tangle with criminal enterprises far more harmful and dangerous. 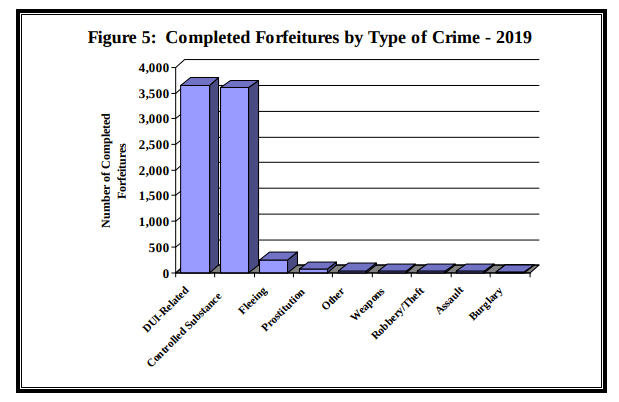 Oh thank god. They’re dismantling Big Drunk. We won’t have to fear the scourge of alcohol/drug consumers for much longer. #Heroes. And if that wasn’t enough, the dangerous Sinola Fleeing Cartel is being destroyed bit-by-bit. Abandoned property is so much easier to seize and forfeit than stuff people are still standing next to and stating their claim for.

This is how asset forfeiture works: easy wins predicated on criminal activity that rarely affects anyone besides the person stopped and their property. It all adds up though. For the state of Minnesota, the total was $7.5 million. And what did it accomplish? Did it cripple the non-organized crime of driving under the influence? Did it make it less likely for people to carry their personal stashes of illicit substances? No one dismantled a drug cartel. No one ensured Minnesotans would be subjected to fewer violent crimes. All that happened was cops took stuff that was easy to take and spent the money once it rolled in.

Thank you for reading this Techdirt post. With so many things competing for everyone’s attention these days, we really appreciate you giving us your time. We work hard every day to put quality content out there for our community.

Techdirt is one of the few remaining truly independent media outlets. We do not have a giant corporation behind us, and we rely heavily on our community to support us, in an age when advertisers are increasingly uninterested in sponsoring small, independent sites — especially a site like ours that is unwilling to pull punches in its reporting and analysis.

While other websites have resorted to paywalls, registration requirements, and increasingly annoying/intrusive advertising, we have always kept Techdirt open and available to anyone. But in order to continue doing so, we need your support. We offer a variety of ways for our readers to support us, from direct donations to special subscriptions and cool merchandise — and every little bit helps. Thank you.