There’s never been a better time to be a hardware hacker: the tools are cheap, the information is free, and the possibilities are nearly endless. But that doesn’t mean there isn’t room for improvement. The Flipper Zero was developed to make the world of hardware hacking even more accessible, and as of this writing, has officially ended its Kickstarter campaign after raising a staggering $4.8 million. To say the community is excited about this little gadget is perhaps an understatement.

So what does the Flipper Zero do that’s gotten everyone so worked up? Well, for one, it’s not so much what it can do as how it does them. Taking inspiration from the already popular pwnagotchi project, the Flipper Zero gamifies the normally rather mundane tasks of sniffing for 433 MHz signals and flashing EEPROMs with the addition of an animated dolphin that’s sustained by your hacking. If you want the little fellow to grow and be happy, you need to keep poking and prodding around at any piece of hardware you come across. 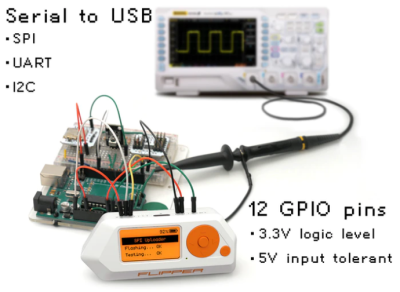 If you’re looking for a comprehensive list of features, that’s a little harder to nail down. Partially because the device has picked up a number of new tricks (such as support for Bluetooth and NFC) thanks to the fact it made better than 8,000% of its original funding goal, but also because it can be expanded with additional hardware and software which obviously won’t get developed until the community gets their hands on the core device.

But even the core functionality, demonstrated in the video after the break, is quite compelling. The Flipper Zero’s CC1101 transceiver chip (anyone else thinking of the IM-ME right now?) allows it to record, analyze, and play back RF signals from 300 to 928 MHz, meaning you can instantly take over remote control systems that aren’t using a rolling code for authentication. It can also read and emulate many different RFID cards, record and transmit IR signals, emulate a USB HID device and run programmable payloads, and act as a USB to UART/SPI/I2C adapter. All contained in a sleek and pocket-sized enclosure that looks like a proper cyberpunk hacking gadget.

We’re extremely interested in seeing what the community can do with the Flipper Zero, especially now that the extra windfall has allowed the team to create a formal Developer Program for people who want to help work on the core platform or produce add-on modules. After banking nearly $5 million, this will be the yardstick by which all other crowd sourced hacking gadgets are measured for years to come; let’s hope they make it count.